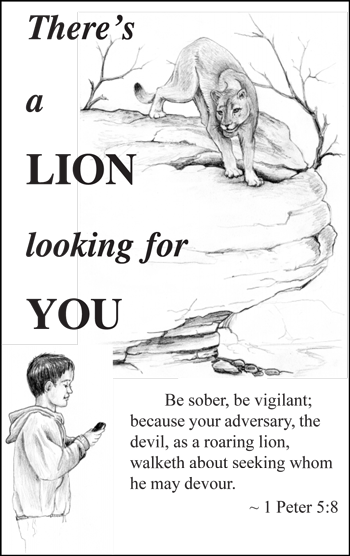 The Devil is your enemy. He knows God will punish him forever in Hell, and he wants to take many along to suffer with him. Satan and his angels (helpers) are busy every minute of every day seeking souls who will let him take over and control their thoughts and actions.

A lion’s strength and his roar frighten his victims. In the same way, the Devil works on each person’s weaknesses to scare them into obeying him.

He may say to the drunkard, “You know you can’t quit drinking. Why do you try to overcome this temptation?”

To the thief, he says, “See what you can steal without getting caught.”

The Devil is a liar and he will teach you to lie and think no more about it. He may cause you to repeat gossip, or to start a story about someone which is not true.

Satan will ask you, “Do you really want to go to church? Think of the fun you could have at the movies or the races!”

To the new Christian, the Devil will say, “People are making fun of you and telling stories that are not true. Do you really want to go on in this hard way?”

Revelation 21:8 says, “But the fearful, and unbelieving, and the abominable, and murderers, and whoremongers, and sorcerers, and idolaters, and all liars, shall have their part in the lake which burneth with fire and brimstone, which is the second death.” That is the Devil’s reward and the place where he is taking all who follow him.

Luke 19:10 says, “For the Son of Man is come to seek and to save that which was lost.” God is the only One who has more power than Satan. He is looking for people to serve Him and has prepared a wonderful place in Heaven where His followers will go after death. The Revelation tells of many blessings which will belong to the ones who overcome the Devil by accepting the blood of Jesus to wash away their sins.

Watch out for the Devil. He wants You! If you let his power scare you, and if you believe his lies, he will destroy your soul in Hell.